Skip to content
Home
/
About Us
/
The Doric Order

The Doric order is the earliest of the three Classical orders of ancient Greek and later Roman architecture; the other two canonical orders were the Ionic and the Corinthian. 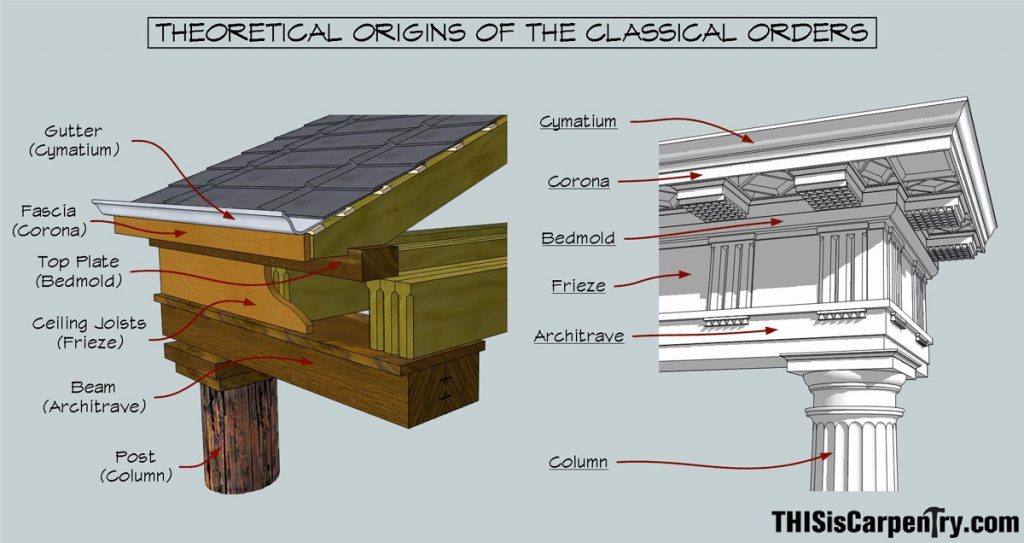 The Doric order is characterized by a plain, unadorned column capital and a column that rests directly on the stylobate of the temple without a base. The Doric entablature includes a frieze composed of trigylphs—vertical plaques with three divisions—and metopes—square spaces for either painted or sculpted decoration. The columns are fluted and are of sturdy, if not stocky, proportions.

While there are no direct scientific evidence that support the ancient Egyptian origins of the fluted Doric column, careful observation leads us to think that it is possibly inspired from pre-dynastic Egyptian use of bundled papyrus pillars. For more information on this, read this short article form the 1936 edition of Nature magazine.

The buildings imitate in stone masonry various types of of temporary structures made of plant stems and mats that were erected in Upper and Lower Egypt for the celebration of the Jubilee Festival, the rituals of which perpetually renewed the affirmation of the royal existence in the hereafter. The translation into stone of structural forms previously made out of plants may be seen in the long entrance corridor to Zoser’s [Zoser: the First Dynasty pharaoh] funerary precinct where columns that resemble bundles of reeds project from short spur walls on either side of the once-roofed and dark passageway. A person walking through would have emerged suddenly into a large courtyard and the brilliant light of the Egyptian sun. There, to the right upon exiting the portico, one would have seen the gleaming focus of the entire complex, Zoser’s Pyramid. https://buffaloah.com/a/virtual/egypt/sa

How to become a member of our Lodge

All Masonic activities are put on hold due to the pandemic. Under normal circumstances, we meet at 6:30 PM on the 3rd Wednesdays of each month except in July and August. If you wish to apply for membership, please contact us.